2015 Marathon de Paris via Flickr http://flic.kr/p/rWkCgq ok, so cut to the chase 4:26:52 finish at a 10:06 pace for my first marathon.  But that does not really reflect the difficulty of this race, have a look at the splits. 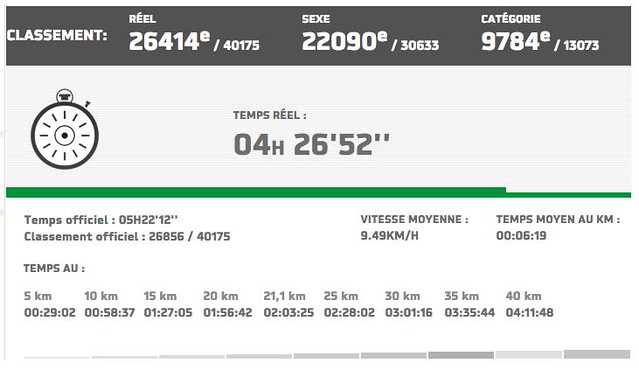 The course is pretty in the first 1/4 and the third 1/4, the middle part and last part through the big parks is a little tough as there are not a lot of spectators and isolated so it requires some trudging through those miles.  The open is great as you run past Concorde, the Louvre and after making the loop at Bois de Vincenne you come up on Notre Dame and the Eiffel Tower.

The organization for this race is a little different when compared to US races.  Water is only every 5KM, so make sure you fight for water due to the long gap between stations, and i really mean fight as it’s a scrum to get water.  They also serve fruit and sugar cubes at some stations–yes, real pieces of cut-up fruit, in this case bananas and oranges which people then throw the peels onto the wet road so you have to take care as you run through the aid stations.   In some parts of the race near the end, there are no barriers on the street so people start standing in the streets and then you run through a tunnel of people which is both exciting and nerve wracking!  Aside from these few odd bits, overall it’s a nice race to run and you have the bonus of enjoying Paris after your race!