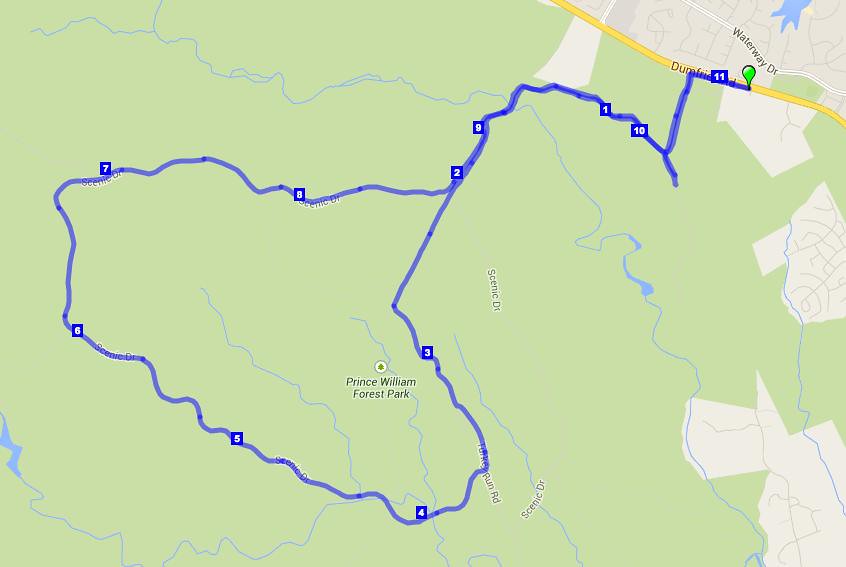 This is an odd race, the course is actually quite fun, running through Prince William Park down in Woodbridge (a number of races use this park over the year), but the primary reason that people run this race is that finishers get a guaranteed entry into the Marine Corps Marathon in October.  The MCM is now lottery based for entries (though it’s much easier to get into then NYC), so if you miss out on the MCM lottery this is one of the few ways to get in.  Unfortunately they limit the field to around 2000, registration is less then 2 weeks before the race and this year it sold out in about 5 minutes.

With that said, the range of racers is very wide, from folks who have not yet started their training at all, to folks that are well experienced, so it requires a lot of attention during the race due to the range of racers.   The course itself is reasonably challenging, nearly all in the woods and most of it on crushed gravel trails.  There are a few tricky sections where the rocks are quite large (golf-ball size), so watch your footing-especially if the trail is wet.  There are a handful of hills on the course, including a set in the last mile so keep a little in reserve.

The race length, 17.75K (just over 11 miles) is for the founding year of the Marines, 1775.  Overall it’s a pleasant race, but because of the different motivations it’s not a great experience race.  The organization is great (though the long wait at the start due to the need for shuttle buses stinks), but the atmosphere is not as fun as other races.